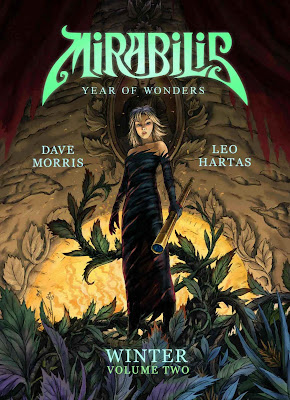 As if the news about the upcoming Mirabilis graphic novel on iPad wasn't exciting enough, we are just about to put ink on a deal that will see Mirabilis: Winter, the first 200-page instalment in our fantasy saga, released in early 2011 as two glorious album-sized hardbacks by PrintMedia Productions.

PMP are the guys behind Strip Magazine, one of Europe's leading anthology comics. The first of their planned slate of graphic novels is the rip-roaring steampunk adventure The Iron Moon, by Stephen Walsh and Keith Page, previewed here and available for pre-order on Amazon here.

These books are really going to be something to cherish, not least because the format is a jaw-dropping 9" x 12". Have you seen the Charley's War books? Yep, that big. And hardbacks. In full color. There's got to be a catch, right? And there is, if you live outside the UK, because these two volumes will only be available in Great Britain. However, US readers can get the trade paperback editions from Amazon.com and the monthly Mirabilis comic book will be available in the USA from January. So really, everybody wins.
Posted by Dave Morris on Monday, December 06, 2010