Dance on moonbeams, slide on rainbows 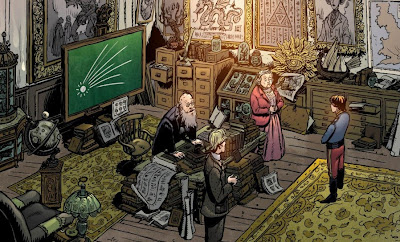 While adapting the first 8 issues of the Mirabilis comic book for iPad, iBookstore and Kindle, I'm not neglecting the whimsical correspondence of the Royal Mythological Society that features on the comic's letters pages. These missives show the kind of things that are going on around the world as the ever-nearing Comet Meadowvane strikes a great green line through every rule of science, reason and logic. There's a whole book's worth already - and more coming in all the time - which makes them ripe for packaging up as an ebook.

New readers, of whom we have quite a few lately, may appreciate a bit of explanation at this point. (You old hands can jump straight down to the latest RMS letter.)

It is a little known fact of history – or myth – or both, that around the start of the twentieth century there existed a lost year.

In this year, a green comet appeared in the sky. As it grew larger, things that would previously have been considered utterly fantastical began to seep into everyday life. By the height of summer, imagination and reality were so seamlessly merged that few recalled a time when the world had been otherwise.

Mermaids swam in the Mediterranean. Martians commuted by train from Woking. Greek gods gave lecture tours of the United States. And with this new way of life came a whole set of problems of etiquette and decorum (see reference to mermaids).

Fortunately, the solution was at hand. In the depths of the British Museum, intrepid academics Bampton “Bammy” Bromfield and Cyril Clattercut had long been cataloguing accounts of the uncanny from around the world on behalf of the Royal Mythological Society. The arrival of the green comet was about to give them the busiest year of their lives. As you can see from letters like this:

If you could see my hand shake as I write this. Well, you can see from the ink blots how my nerves are shot. I am lately escaped from an ordeal of some months, and here is the way of it.

I think it was back in April - my diary says it was April the twentieth, but it seems now to have been in another life - I had occasion to drop in at the Savoy. O unhappy day! By bitter irony I was not even staying there; I had taken rooms at Claridge’s and only called at the Savoy to see if a lady friend of mine was in town.

The hotel had lately appointed a minotaur in a commissionaire’s uniform to stand outside the doors and hold an umbrella for people arriving by carriage. I have had to cross a few fields in my day, and I did not like the look of those little dark eyes and the snorting nostrils, I can tell you, nor the way the cap was pushed up by the fellow’s horns. But I hurried past him, pushed through the revolving doors - and there my ordeal began. An ordeal of four months when I wandered as though in a maze, ever turning as those accursed doors spun round and round and I thought I would drop from dizziness!

Occasionally I saw fleeting figures pass through. I called out but cannot tell if any heard me; certainly no-one stopped to help. At one point, after perhaps a month had passed, I stumbled out of the door and thought I had achieved deliverance. But it was not the lobby of the Savoy at all, but a vast hall of cracked masonry filled with sand drifts, which gave the impression of a great weight above as though far under the ground.

After that I returned to the revolving door - anything rather than bear the stillness and silence of that empty tomb. I survived on the rainwater that intermittently blew in as the weather changed outside, and once I caught a pigeon that had strayed through the hotel doors. Very tough and stringy meat when one has no fire. But for that poor bird, and the deposits of chewing gum left by some of the hotel’s foreign guests as they flitted through, I would surely have starved.

Was it desperation that led me to recall the stories of my youth? I was half mad by then, certainly; the whole world was on a corkscrew and my mind with it. I found myself thinking of the thread that Ariadne gave Theseus to lead him safely through the Labyrinth. It may have been in a delirium that I plucked the end of a thread from my trousers and attached it to the door frame so that even as it whirled around, I could keep my hands on that thread and follow it slowly back until I emerged onto the Strand, in the clear September light, and gulped the sharp and smoky autumnal air. It could have been a breath on the summit of Olympus, gentlemen, so sweet I found it.

The minotaur was still there. I gave him a look and he gave me a look back, and I was at the point of confessing how meanly I had thought of him before, and declaring him a good fellow, and I plucked at his sleeve and was ready to embrace him. But do you know what he did then? He called for the police and they took me away, and now I am up on a charge of public indecency. For, you see, in the escape my trousers had all unravelled.
Yours sincerely,
Theodore Lolley,
Seaford
Dr Clattercut replies: My heart goes out to you, poor chap. But other than publishing your letter as a caution to others, there is little we can do. My advice is to pay the fine and put the whole thing behind you.

Prof Bromfield: Quite. I got in touch with the manager of the Savoy and he tells me they originally had Cerberus on the door, but that was even worse.