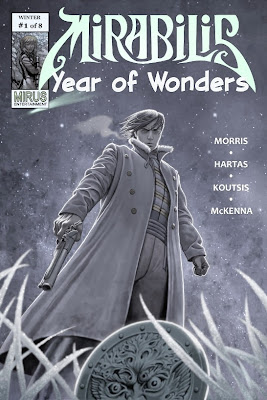 Do not adjust your monitor, this is the slightly restyled cover to go with the new black & white Mirabilis ebook. There's also a full color e-comic of issue #1 that we'll probably put up in the iBookstore in the near future.

Of course, neither of those EPUB versions will replace the truly scrumptious iPad comics app, which is still the very best way to view all eight issues of Mirabilis so far - not to mention the upcoming issues #9 and #10 that we're working on right now. More on those very shortly.

Incidentally I don't have a single share in Apple, I'm just a genuine born-again iPad nut! And I'm not alone. Over Christmas another 7 million savvy people became iPad owners.

If perchance you're hovering in the doorway of the Apple store wondering whether to buy yourself an iPad - well, you're not going to hear any arguments to the contrary here. My mate Dermot Bolton came round last night and we were both ready to bore for England with our mad enthusiasm for Steve Jobs's little gizmo. You can be sitting around at dinner and somebody mentions a new movie, or a Shakespeare sonnet, or a piece of music, or the latest discovery about mankind's ancestors, and with a swipe of the hand you're in Star Trek territory looking it up. Being light and easy to handle, it's nothing like a laptop (let's face it, laptops are rubbish for handing round to look at photos and videos) and although I cited the sci-fi connection just now, the thing the iPad actually makes me think of is a Victorian family encyclopaedia combined with a brilliantly colored magic lantern show. Just the perfect device for reading Mirabilis on, if you think about it.
Posted by Dave Morris on Wednesday, January 19, 2011