Judging a comic book by its cover 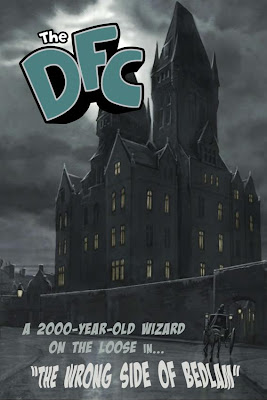 Believe it or not, this was our early mock-up for the cover of The DFC issue 34 (Jan 2009). I mean very early, when we first started planning Mirabilis in the pre-publication days before we had any idea what the comic was going to be like. Back then, Martin and I were probably envisaging a cross between 2000 AD and Strange Tales. (I mean the original 2000 AD and Strange Tales, of course, though being like the new ST would be cool too.)

As we quickly came to realize, this kind of spooky mood piece wouldn't have worked at all. Truthfully, it would barely have worked as the cover for an issue of something like Eerie, would have fizzled and gone out as a regular comic book cover, and on the front of a weekly anthology comic like The DFC, with funny animal stories and some of its readers barely out of short pants? Doh, we're idiots; it would have sunk like a copernicium balloon. Not because it's a bad painting - Martin is never less than brilliant, and that's on his bad days. But he created this as a piece of concept art, and it was never meant to dramatize a scene. 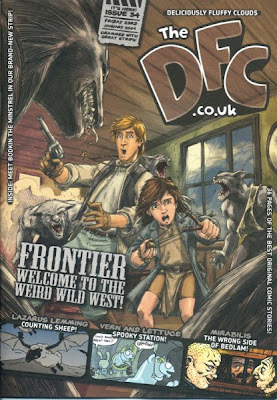 In the event, DFC #34 had an absolutely superb cover by Andrew Wildman for Frontier. Whereas our Bedlam cover merely rewards you for already knowing about the accompanying story, that image of Daisy Adams and Mitch Seeker menaced by werecoyotes entices you to find out. The DFC editor, Ben Sharpe, must have thought we were a few bullets short of a sixgun for our suggestion, but I'm sure he was very polite in rejecting it. I do wish the real cover didn't have all that cluttering text and design element overload, though. Would you do that to a Wildman original? (You may say I'm not thinking like a kid, but my 9-year-old self had the exact same opinion about comic covers. That's another reason why in those days I followed Marvel rather than DC.)

Btw if you recognize the Bedlam picture, it's because we've talked about it before and that shows you've been paying attention. It's another of Martin's movie concept paintings, and I briefly considered using it for one of the covers of the the Mirabilis Kindle mini-editions. But those covers on Amazon are displayed sooooo small, and the content in each mini-edition so bite-sized, that a big atmospheric cover just didn't fit. Instead we went with three minimalist portrait-based covers that do exactly what it says on the tin.

What got me thinking about The DFC after all this time? It's because Team Mirabilis received an invitation to a party at the David Fickling Books offices, and the invitation came from Mr Ben Sharpe himself. So what's the occasion? Is The DFC coming back? My lips are sealed - for now - but the party is this afternoon, so right after I get back from that I'll be sure to tell you everything. 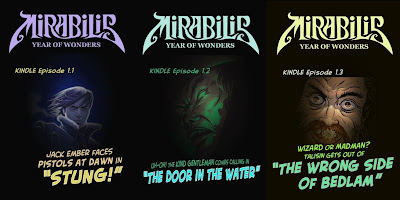