From the ashes rises a burnished new bird 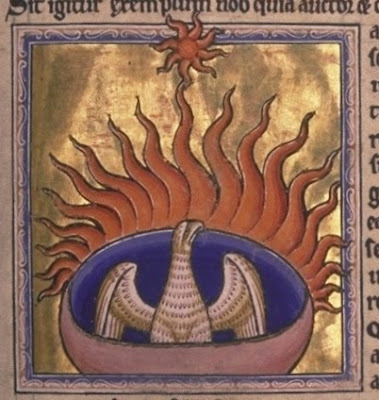 Evoking fond memories of Eagle but pointing to the future, it's going to be called the Phoenix. That was the message from David Fickling, Ben Sharpe and their reassembled DFC team at Oxford today. The party was held, not at the old DFC offices but a few doors further along Beaumont Street, underscoring that this is not to be under the wing of Random House, as the DFC was, but an entirely independent venture.

Phoenix will be weekly from January 2012 and is surely going to have a lot in common with the DFC of old, given the familiar faces toasting the glad tidings with glasses of champagne from the Jeroboam that David has been saving on his mantelpiece for just this occasion. Among the assembled terawattage of talent, Leo and I spoke to Garen Ewing, John Aggs, Ben Haggarty, Will Dawbarn, Neill Cameron, Jim Medway, Robert Deas and Philip Pullman (who dropped a remark about ebooks that left me stunned, but I don't think I can say any more about that here). There were a lot more creative folk besides those I've mentioned, but by that time we'd wedged ourselves in a comfortable corner by Caro Fickling's chocolate brownies and we didn't see any reason to move from there.

Most important of all, the funding for Phoenix is secure for three years, giving this new incarnation of the comic time to grow, develop and become self-sustaining. Even though everybody had pretty much guessed the news from the moment we first got the invitation (they didn't exactly try to hide it with all the DFC backronyms) I must say there was a very happy and warm glow in the room when Ben was actually able to climb up on the table and announce it, and I'm certain this goes for everyone there when I say that David Fickling's dedication, persistence and incredible energy are what brought the DFC back from the dead, and this time round it's going to be better than ever! More over on Andrew Wildman's blog.
Posted by Dave Morris on Wednesday, March 02, 2011