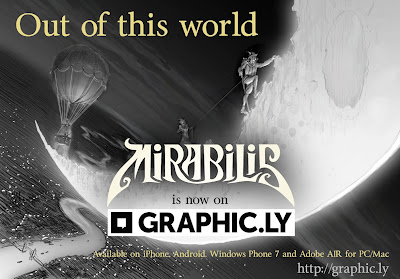 A picture may be worth a thousand words but, in the immortal words of Tony Stark, is it too much to ask for both? So here's the thousand words: Mirabilis season one launches this week on Graphic.ly's multi-platformed storefront. If you've had your nose pressed like Tiny Tim to the Apple Store window wondering about that iPad, save your money - the new version's out in a month or two anyway, and in the meantime you can now get Mirabilis on a whole bunch of smartphones and other devices.

Which devices? Well, desktop or laptop for starters. You can get the free Adobe AIR application which really is a nice presentation frame for your comics. Then there are the iPad, iPhone and Android versions - also absolutely free, naturally. And if you prefer to go old school, there's Graphic.ly's web reader that lets you have a look inside all their latest titles and to view the ones you collect on stunning fullscreen view. Setting up your Graphic.ly ID takes a couple of clicks and then you can read your comics on any or all of the supported platforms.

Is that not enough great news for you yet? Okay, well try this: as an introductory offer you can get both Mirabilis #1 and #2 for free. And Graphic.ly offer a whole bunch of other great titles in their online store, many of them free, and all backed up by the kind of extras we're coming to expect in digital comics: creator info, interviews, trailers, character tags and so on. Having just raised a further $3 million investment, Graphic.ly are ramping up to be one of the major forces in the new comics media, and we're very proud to have Mirabilis as part of their 2011 flagship line.

Know what, that's not even three hundred words - but I don't want to hold you up. I'm sure you'll be eager to get your phone out and start reading!
Posted by Dave Morris on Wednesday, March 02, 2011