Just browsing: why should comics have to be "an art"?

I started off this week talking about the two ways of reading comics: as an aficionado appreciating an art form, or as a casual reader looking to while away a half hour. But what is a casual reader? These days, with the comics ecosystem looking like a rapidly drying waterhole, pretty much the only people reading comics are those who know their local hobby store like the back of their hand. In comics, the nearest equivalent to a casual reader in other media would be somebody who is picking up a comic for the first time.

Does that describe you? You don’t know where your local comic store is? You'd feel uncomfortable reading a comic book in public? You really never heard any name in comics other than Posy Simmonds and Hergé - and you don’t actually read even them?

Okay, let's say you answer yes. So you're a reader who might possibly pick up a comic with mild interest, but you're a long way from being the kind of comic reader who scurries home with the week's latest issues in mylar bags. As you're a casual reader, I've got a couple of scenarios to tell you about that might sound familiar. When Leo showed some pages of his comic art to a family member (most certainly not someone who has any affinity for comics) she angrily demanded: “All these panels on a page - how do you know which you’re supposed to read first?” A friend of mine, less emphatically, complained: “The characters were in one scene, then I turned the page and it was a different bunch of characters somewhere else.”

If those are your first hurdles, it’s simple. Read left to right, top to bottom. Most comics are not tricksy about this. You wouldn't hold a novel at arm’s length between thumb and forefinger and ask which end of this curious beast is its head. Fine, just read a comic the same way you would any book. And addressing the second point: yes, there will be cuts between different scenes. In the same way that movies have largely dispensed with intertitles in the last, oh, eighty years, so comics nowadays don’t often feel the need to flag the scene change with a big explicatory caption. You’ve seen a movie? You’ve watched television dramas? Know what a turtle is, Leon? Same thing.

For that relative of Leo’s, comics will always be disreputable and incomprehensible. This is quite a common attitude in Britain, at least if the comic is aimed at readers over eight years old, though it is possible to break through those prejudices. My friend persevered. Snowed in at Moscow airport over Christmas, he downloaded all eight issues of Mirabilis to his iPad and surprised himself by reading the whole story, understanding it, and most importantly eager for more. But that disqualifies him from reading today’s post, I’m afraid. He’s crossed the border country. He’s a comics reader now; even if he never looks at another comic, his sensibilities have been wakened. Remember we are just talking to the purest comics innocent here.

How should you read a comic? Just think of it as a movie storyboard. (Your hackles are rising at that? Then you’re in the wrong class. You’re one of them ay-ficky-oh-nadoes. Get outta here, this is 101.) A storyboard, I say. And as you are used to visual stories in the form of movies, TV and game cutscenes, which are all sit-back media that must resort to dramatic emphasis to engage the viewer’s attention, chances are you will prefer this: 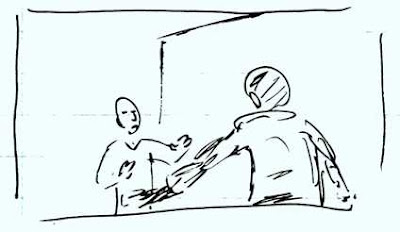 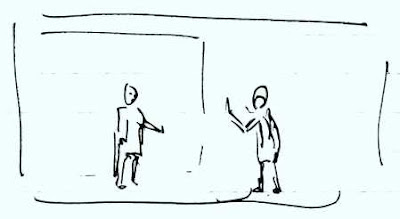 You could almost call those the movie and TV version of the shot. And the casual comics reader is likely to respond more positively to the former. Which begs the question why the other style exists at all. Is it just the lazy or low-budget option? Like in Deadwood, say. If we are just given a straight two-shot of Al Swearengen berating some poor sap in language of the most baroque profanity, is that because the director didn’t have the time to mount the camera on a rail on the underside of the bar so we could get a low-angle tracking shot instead?

As the sophisticated comics reader knows, sometimes less is more. (And when I say “sophisticated” by the way, I just mean anybody who’s read enough comics to know their way around a thought balloon.) Consider the range of styles an artist might use for his comic book characters. Leaving off the extremes of realism and pure cartoon, we’ve got a spectrum a bit like this: 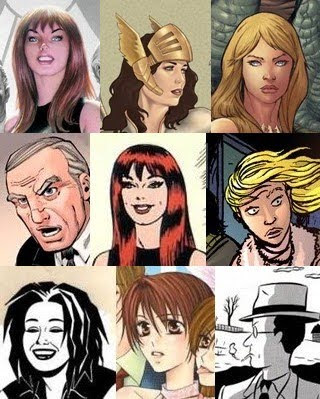 The novice, the which-way-do-I-read-this guy, will probably start off preferring one of the faces in the middle somewhere. Realism can easily end up looking stiff and spooky on the page, while the more stylized faces are more approachable but, as regular characters that we’re going to invest in, they still take some getting used to. So again: why would an artist deliberately choose to draw his character with stylized features? Well, think about a classic Disney movie like Snow White & the Seven Dwarves. Is it the normal human characters like the traditional prince and princess you most readily connect to - or is it the warm, daffy, rambunctious cartoony characters? See, realism isn't everything.

The dramatic, cinematic composition and the midway-realistic facial features are both designed to appeal to a sit-back reader. These style choices aim to push the story at us. Any of those big amazing splash panels that make you sit back in awe – think about it, unless those are intended as point-of-view shots to put us in the lead character’s shoes, they’re actually encouraging you to see the story from the outside. You are amazed by the spectacle, not seduced by the personalities.

And that’s what a casual reader wants. But as you read more comics, you’ll most likely start to get under the skin of the characters. Dramatic compositions then can seem distancing, and you want to see them sparingly if at all. The artist knows to save them up for when a zombie with a machete comes blundering through your French windows, not for a scene where two guys in an office are having an argument over the week’s payroll.

Characters too. The stylized character is closer to our own vague sense of how our face appears to others. The simplicity allows us to pour our own identity in. That, of course, is no longer a sit-back response to a story, which is why it’s not the casual reader’s choice. An airport thriller or a blockbuster don’t expect us to engage as an active process, they just want us to open our minds and let the story blow through. This is not to disparage the casual reader. People have a perfect right to experience stories however they like, and if you’re a busy man like, say, Barack Obama or Steve Jobs, I doubt if you want to have to make the degree of commitment to a story that the sit-forward approach demands.

We could look at content too, but I figured on leaving that out of this discussion just to save it from ballooning into an entire book. I will just point out that when fans say that the next Iron Man movie should follow some obscure and immensely detailed story that's been running in the comic book sometime in the last few years, they're missing the whole point. The most successful superhero movies are the ones that hark back to the simple, arresting, broadly accessible plots of the mid-'60s. Lost brought SF to millions who would never watch or read hardcore sci-fi. Phantom of the Opera appeals to a much bigger audience than are ever going to roll up for Rigoletto. It's not just the readers of superhero comics who've taped their heads inside a genre box - though look at their frankly ridiculous suggestions every time a new superhero movie is announced and you'll grasp the stratospheric disconnect from commercial reality that has had comics sluicing down a narrowcasting sinkhole for the last decade.

To attract a new, large, casual readership to story-based comics, I'm saying it helps to have bold, dramatic staging of action. Characters need to be not too cartoony (the masking effect, as Scott McCloud terms it) because to lock in on the empathic effectiveness of that first requires the reader to have developed a sophisticated approach to the material. The content needs to be pitched at "network" rather than "cable" as far as genre flavor and audience commitment are concerned. Don't rely on people becoming fans, in other words, because most people are not by nature fannish. And most of all the characters need to be relatable, not merely aspirational - with problems, failings, and character flaws that let us root for them to grow into believable heroes.

And you know what's ironic about this? None of it is new. It's exactly what Stan Lee and the guys at Marvel were doing with such phenomenal success through the '60s and early '70s. It worked precisely because they were just trying to entertain. The Bullpen approach didn't see anything wrong with comics being "low culture". They weren't out to make the "Ninth Art" equivalent of Last Year at Marienbad. Personally I love Mr Punch (Gaiman & McKean) and it's a book I'll read many more times. But it would be no use giving it to a casual reader. Something like The Clockwork Girl, that ticks the boxes I'm talking about here.

Yes, all the above are sweeping generalizations and are fuelled by egregious assumptions on my part. You will no doubt be itching to point out exceptions to every "rule" listed here. So leave a comment. I'm just getting the discussion started. And it's a discussion we need to have if comics are to break the stifling label of being "a worthy art form" that the fans would inflict upon it.