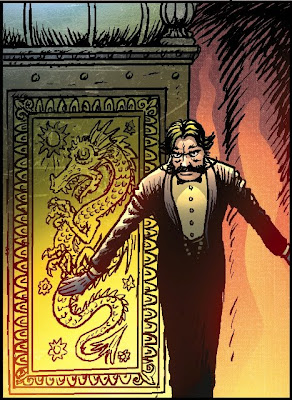 What I thought I'd do today is return to the subject I touched on with the Tintin post - only from a slightly less controversial angle. Put another way: comics don't have a broad readership anymore in the US or UK. In the Silver Age, a top comic could nudge a third of a million copies a month, and most of those readers were casual and uncommitted. Definitely not hardcore fans. I say we need to invite more readers in - not necessarily to become tomorrow's hardcore, or even tomorrow's regular readers, but because any artistic medium can only sustain its devotees if they are floating on a sea of casual and occasional buyers.

Leaving aside the question of content and retail outlets, both of which have slid comics across into their current niche state (or been slid themselves, it's a feedback loop) there's also the whole question of form. How are comics perceived by different kinds of readers, and are there lessons we could learn about how to give those casual readers who currently dismiss comics an easy way in? I picked on Tintin before, but I could just as easily have highlighted the transition from Ditko to Romita Sr on Spider-Man, or how Dr Who went from being a fanboys' favorite to family fare. What one person calls dumbing down, another sees as broadening the appeal.

And incidentally, even restricting the discussion to just form, we're hardly going to scratch the surface in a few posts, so think of this as just a preamble to getting a debate going.

In Bali (bear with me, this is going somewhere!) you can see some of the most exquisite woodcarving you’d find anywhere in the world. Craftsmen typically spend five years as an apprentice, five more as a journeyman, and only then qualify to call themselves masters of the art. Among aficionados, the market price of a master craftsman’s carvings reflects all that hard-earned skill.

Which is fine as long as the people buying the works belong to a culture for which woodcarving is an esteemed and deeply appreciated art. But now introduce tourists into the mix. On the lookout for something to put on the mantelpiece back home, they don’t look at woodcarving from a long artistic tradition. They can see that a journeyman’s work is better than an apprentice’s, but they don’t perceive the distinctive élan, that final five percent leap towards perfection, that hoists a master’s work up into the genius bracket. And they certainly won’t fork out the extra $100 that’s demanded for a finely carved cheek, the precise angle of a finger, the delicate lips that smile just so.

And so it is that the journeymen get rich while the masters can settle for pride or a living wage, but not both. The latter choice means turning their backs on what they’ve learned, eschewing the extra time and tears required to produce a masterpiece. They may as well just produce journeyman-quality works, that being what the market has chosen as the maximum value of the utility function.

All art is like this. At college, I had two friends who were really into classical music. They would laugh in delight at what seemed to me to be random notes in a piece, saying, “Did you hear what he did there?” Not me. I just wanted to crank up the volume and listen to “Gary Gilmore’s Eyes”. You have the refined form, the high art, the medium in which the cognoscenti are tuned to detect every nuance. And then you have the guy who just came in to while away a half hour.

To talk about reading comics, we need to think about what kind of reader we mean. Comics have become such a niche interest, like crystal radio sets or the Japanese tea ceremony, that almost everyone who reads comics does so as a connoisseur. If that describes you, pop back next week. But if you’re honestly just a casual reader – maybe you enjoyed the Iron Man movie or From Hell, and you’re curious to see if the medium from which they sprang has anything to offer – then you need to pick the other box, opening here on Friday.
Posted by Dave Morris on Tuesday, March 22, 2011