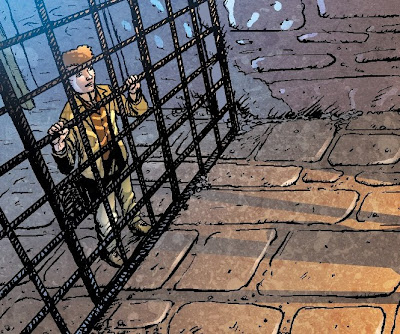 The first Mirabilis hardcover goes on sale in just over a week, the second volume is likely to follow within two months, and we're back to working full time on season two. So what could possibly go wrong? Here's what: an update to the iPad app which, despite being approved by Apple, turns out to contain a fatal bug that prevents you from downloading any of the issues. Epic fail is not an overstatement.

If you already had version 1.0 and just got the update, you can fix everything by deleting the new version from your iPad, then sync with iTunes on your computer to reinstall version 1.0 of the app. You'll need to restore the issues you already paid for, but you don't (of course) have to pay for them all over again. The old app will just re-download them, and in a minute or two you'll be good to go.

It was particularly annoying to hit this bump in the road as we had planned an update with lots of cool new features, including a Read Next Issue button and a social networking feature whereby you could tell friends about Mirabilis. None of those were in the 1.1 update, though, which really only had a new front page. So I guess it's a case of fixing what ain't broke and suffering the consequences. Doh.

Our hard-pressed coder, Simon Cook, is unfortunately on vacation this week so we won't get the new version of the app fixed for some time. But Leo has been in touch with Apple, who promise to try and revert back to version 1.0 as soon as possible. In the meantime, I'm in the odd position of having to tell everybody not to get the Mirabilis app - and if you do have it, don't update to version 1.1. What we'll aim to do is stick with version 1.0 for the time being, as it does the job perfectly well, and we'll only update when we can bring in a whole lot of new features in one go.

Even this cloud has a silver lining, as all eight issues of season one are now available on Graphic.ly, whose tech allows you to buy once and view the issues on multiple platforms including iOS, desktop and Android. And as a bonus, for a limited time only, issues #1 and #2 are both free. Get them from Graphic.ly here.
Posted by Dave Morris on Thursday, April 28, 2011