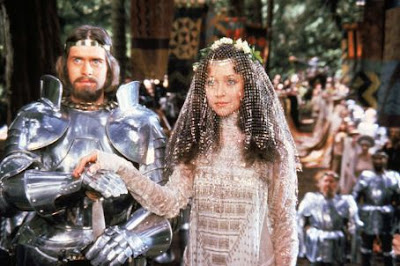 “It’s usual in these stories,” David Fickling reminded me, “for the hero to be marked out by destiny. Often he’s a prince, for example.”

I didn’t want either Jack or Estelle to be predestined for greatness, preferring instead to explore the idea that the hour (or year, in this case) produces the man (and woman). On the other hand, I wanted Mirabilis to be commissioned for The DFC so I probably tried to get away with a noncommittal “Um.”

The heroes of fairytales are often royal, a shorthand for them being the sons of gods as they are in myths, because if you take a scion of royal blood and have him brought up in a woodsman’s hut you’ve got immediate rooting interest. The tension in such a gross disturbance of natural law means that the story practically tells itself, unfolding nicely until the lad sits at last on the throne that was always meant for him.

That seems too easy though. I would’ve preferred it if Arthur was not born to draw that sword, had been just a clever peasant who rose to the occasion. People who crown themselves, as Napoleon knew, create a more lasting myth. Likewise when Don Blake saw the inscription: “Whoever wields this hammer, if he be worthy, shall possess the power of Thor” it seemed to say that an ordinary man could achieve greatness. It was only later that we found out he’d been Thor all along.

Leaving aside the X-Men, for whom destiny was in the double helix, most of the old Marvel heroes had heroism thrust upon them and had to grow into the part. Peter Parker may have been the archetypal orphan, but there was nothing special about him until the spider bit his hand. That’s what I liked, but it seems from Wiki that they since retconned it:


Babylon 5 creator J. Michael Straczynski began writing The Amazing Spider-Man with #471. Two issues later, Peter Parker, now employed as a teacher at his old high school, meets the enigmatic Ezekiel, who possesses similar spider powers and suggests that Parker having gained such abilities might not have been a fluke - that Parker has a connection to a totemic spider spirit.

Princes in fairytales embody the archetypal hero in rejuvenated form. “His greatest virtue is intuition,” says J.E. Cirlot (A Dictionary of Symbols) and who can doubt it: Arthur handing Excalibur to Uryens, Alexander taming Bucephalus, Luke deciding to just go with the Force. Each shows that, whatever wise gray heads may think, youth is stronger for not knowing what’s impossible.

Yet maybe the facile storytelling trick of having your hero royally born to greatness is wearing thin with today’s sophisticated audiences. Harry Potter, who appears at first to have everything including the birthmark, turns out merely to have been in the wrong place at the wrong time, his special seal of greatness being earned not by birth but by accident and the magic of a mother's love. Likewise Lyra in His Dark Materials - despite being a Moses-like foundling, and having the requisite exceptional upbringing, she is after all just an ordinary girl. Her personality, not her pedigree, is what makes her special.

That’s how I think of both Jack and Estelle: exceptional but no more exceptional than anyone else might be. You will find little nods throughout the Mirabilis story in the direction of a kind of kingship. I won’t give any spoilers here, except to say that they all tie in to the question of whether one can be born heroic or must struggle with one’s self-birth as a hero. Neither Jack nor Estelle has any midichlorians (ugh, again) in the blood, no royal birthmarks, no prophecy to make their greatness a simple matter of jumping through hoops. In the end, we're all princes if we want to be.
Posted by Dave Morris on Friday, April 29, 2011