Front row seats, or up in the gods? 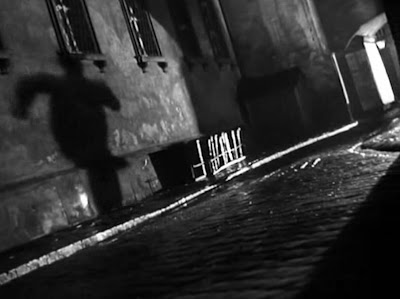 About half way through the Thor movie, I started noticing the Dutch tilt. That’s where you cant the camera over at an angle, as in the trademark shot above from Carol Reed's The Third Man. It’s a trick that works great for creating unease, or even outright panic when you combine it with tracking in and out. (Optional corkscrewing is for mad zombie pics only.)

The best example I know comes near the end of Brief Encounter, where Celia Johnson seems almost to fall across the frame as she runs to the platform edge, completely out of control, propelled by destiny in the form of the skew-whiff gravity of the canted shot.

Thor has quite a lot of tilted shots, especially after Loki has taken over Asgard – which I don’t think is a spoiler. (You already knew that, right? He is the god of mischief.) I don’t want to put anyone off going to see it. It’s a good, fun movie and one of the best Marvel Comics adaptations so far. Now that I’ve pointed out the Dutch angles, you might notice how many there are. Or maybe you won’t. I’m probably a little over-tuned to looking for composition and framing since my day job involves sketching a lot of storyboards.

The point is that tilting the camera, like any technique for creating intensity in a shot, loses its bite if used too much. Same with low angles, short lenses, extreme close-ups, and constantly moving cameras. You have to pick your moment. It has to be when you really need to disturb the viewer or reader. And you need to have done the establishing work first; otherwise that sense of aggravation you’re building up won’t feed back into the story, it’ll all be directed at you.

“Ramp up [the intensity] too much and you get an incomprehensible jumble. In such cases, the intensity of the work as a whole can actually go down. After all, if every panel is turned up to full volume at all times, any hope of dramatic contrast is lost. […] It’s in the variation between panels that true dynamic effects are created.”
- Scott McCloud, Making Comics

The trade-off between camera tricks and solid establishing shots illustrates a dichotomy familiar to comic storytellers. Scott McCloud talks about the opposing poles of intensity and clarity in his book Making Comics. If you don’t own a copy, go to your local bookstore and look at pages 48-49, where he illustrates the point by rendering a sequence of panels several times over from different points on the clarity-intensity spectrum.
I’ve done the same thing in the single panel below. We have a scene where a boat is approaching an island. The low-angle shot would be my usual preference, not simply because it is more dramatic but because it locates the reader right in the story. On the other hand, turning the dial all the way over to full clarity, we get a seagull’s eye view. All is clear, serenely so.

Intensity doesn’t care about being serene. It’s all about the subjective view. In the climactic scene of Rear Window, as Raymond Burr comes to kill James Stewart, we don’t see one master shot. It’s all close-ups and jarring cuts. Because that’s how it feels if a guy is trying to throw you out of a window, said Hitchcock.

It helped that Hitch had the previous 100 minutes to establish the apartment where Stewart is holed up with a broken leg. Establishing shots can be as simple as those building exterior inserts that you get in TV comedies – the coffee shop, the apartment block. Television audiences like to know where they are at all times. And why not? Clarity was the first rule that Jim Shooter used to impress on new artists at Marvel:

“He always stressed that the essence of good storytelling was in the establishing. He had it almost down to a formula; every two or three pages he wanted to see a wide shot of where you were, so that the reader never has to stop and wonder. […] |He was, ‘Be specific, be strict.’”
- John Romita Jr talking about Jim Shooter, Artists on Comic Art

“The reader never has to stop and wonder.” Yes, that is important. But important too is that the reader is smack dab in the thick of things – not just observing the story but experiencing it. Too great an emphasis on clarity can feel a bit like you’re playing a Sims-style computer game: detached, intellectual, dispassionate. Arguably, a comic striving for absolute clarity would even present you with The Sims’ “chemistry set” interface of character needs and moods. You’d never need to stop and wonder, but – oh boy.
Of those thumbnail examples, which is better? The first thing I’d ask is what’s important to the story. In this case, the panel has to establish that the setting is a remote island. Is that clear from the first picture? Although the framing is more dramatic, probably not. The second version leaves the reader in no doubt. And because that clarity creates a sense of isolation out in the middle of the ocean, an emotion that feeds into the subsequent scenes, I’d come down in favour of that version of the shot.

If it were a movie, of course, I could have both. But in comics we have to kill a few more darlings in order to hit that page break.

Sometimes it doesn’t even come down to a trade-off. Think about your scene and you may find a way to frame it that is both lucid and involving. But more often it seems there is a law in the physics of storytelling that says the balance between clarity and intensity has to be a zero-sum game. It’s the trade-off between objectivity and subjectivity. Hitchcock says never to confuse an audience because when they’re confused they aren’t emoting. Despite the Rear Window example above, that seems like a clear vote in favor of clarity. On the other hand, what counts for Forster is not precision and logic but emotional engagement and intuition. Which is why he tells us: “Only connect!”

And you know what? They’re both right. 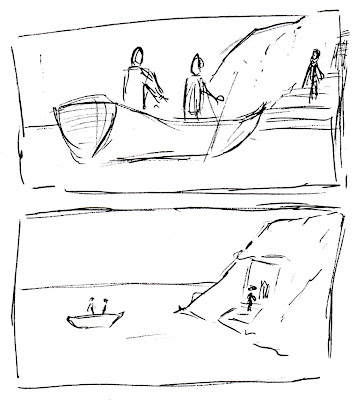