Darkness is too easy 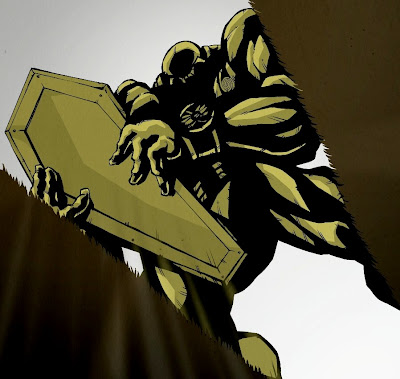 Back when I was working in games I saw a lot of concept pitches. If you’re picturing the likes of Pikmin or Ico or LittleBigPlanet – well, that would’ve been a job to get in early for. Instead, what actually seemed the most common effusion of the collective unconscious was a succession of dark, edgy takes on something like Alice in Wonderland or The Wizard of Oz.

In these pitches, Alice/Dorothy had usually gone psycho, confined to a mental asylum, her family dead or abducted by stark horrors that had pursued her from Wonderland/Oz. And from there it’s a paint-by-numbers to decide what had become of the Tin Man (cyborg), Cowardly Lion (serial killer), Scarecrow (cyborg serial killer) and so on. Those same writers would even have pitched Dark Pooh if Disney weren’t standing guard over Hundred Acre Wood with a very big stick indeed.

The reason why that’s such a heart-sink is not because I don’t like stories with a bit of darkness. More than a bit, in fact. My fave comic of all time is Sandman. No wait, it’s Watchmen. No, maybe it’s Swamp Thing. Whatever – all of those had darkness but they had light, beauty and humanity too. And, in the case of Sandman, real sweetness.

But plain unadorned darkness is just too facile. My wife Roz used to ghostwrite a middle-grade action-adventure series for a brand name author. The heroes were mid-teen crime fighters but the readership was centered on 10-12 year olds, meaning that sex and violence were mostly just hinted at. Over dinner one evening, for fun, Roz and I envisaged a YA version of the series, revisiting the characters a couple of years on and going right into the abyss with them. The kid whose obsession with computer hacking had given him a dangerously detached view of justice. The one who achieved his dream of joining the army but quickly became traumatized by the realities of modern warfare. The rich one, who had hardened and become arrogant working for her father…

In a dark pit struggling to reach the light. It almost writes itself. Trouble is, that’s so easy to do. And nothing good in writing is accomplished with ease.

As well as being the lazy writer’s option, a story of unremitting darkness is tonally boring. It’s way harder to write hope and humor and humanity alongside the horrors – which is why I value TV shows like Buffy, Fringe and Doctor Who. Yet in comics these days we so often see the stories copying the least original videogames, with heroes constantly being maimed or disfigured or driven mad. And, trust me, relentless twentysomething angst is not the way for comics to tap back into a broad market.

The best of the horror comics have heroes who are surrounded by darkness but who haven’t got darkness in their souls: Hellboy, B.P.R.D., even (believe it or not) John Constantine. And the authors of those books don’t gratuitously wallow in the darkness of their stories; they remember they are telling underworld myths that must lead the heroes back to the surface world. Like Alice, emerging from the rabbit hole disturbed, enchanted, altered – a far more interesting fate than simply being forever scarred.
Posted by Dave Morris on Saturday, June 11, 2011