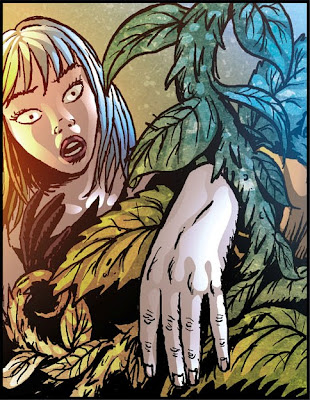 Stories are organic, but they're not single organisms like a tree, say. A story is more like a garden. You plant seeds and then as you walk through the garden those seeds are sprouting and growing and flowering all around - at, you hope, just the right moment.

One of the most obvious kinds of story seed is when you embed the germ of a plot idea early on so that the reader is prepped for it later. Ever seen a movie where the characters get bogged down in exposition in the last fifteen minutes? That's because the writer failed to plant all the seeds. At the end of a story you need to be thinking, "Oh my God, this is happening!" not "Wait - what's happening and why?"

A seed can also be planted to carry the burden of complex discussion of a theme that would interrupt the story if it had to be fully elaborated in dialogue. For example, in the Buffy episode "Crush" (ep 5:14) very early on we hear Willow explaining to Buffy and Tara that Quasimodo in The Hunchback of Notre Dame wasn't really a hero because his decisions were not taken as part of a moral compass: “He did good things for love of Esmerelda, but that doesn’t make a hero”. Later in the story, Buffy is arguing with Dawn about hanging out with a dangerous vampire like Spike. Dawn says, “You used to date Angel,” and Buffy says that’s different, Angel had a soul. To which Dawn replies: “And Spike has a chip. Same difference.”
Because of these seeds, when the climax arrives we’ve already covered the thematic question of what makes a hero: doing good things, or having good motives?

There are two kinds of story seeds. The first is at the basic level of craft. At the risk of mixing metaphors, those are the screws and washers that hold your story together. The second is a more subtle foreshadowing of things to come.

The two types are used well by Edna O’Brien in her BBC adaptation of her own short story Mrs Reinhardt. The main character, who is staying at a French rural hotel, has a valuable emerald necklace that she wears most of the time. She meets an American whom we suspect of stealing the necklace. However, at the end of the story we learn that it was not the American who took it, but one of the hotel maids.
There are two scenes that demonstrate the basic level of seed-planting. The first is in Mrs Reinhardt's bedroom where she is delightedly swinging a pillow, letting off steam because she thinks she's alone, when the maid comes in with breakfast and surprises her. Later, Mrs Reinhardt strays into the kitchen to find the maid and the other serving staff fooling around until the chef brings them to order.

So those two scenes do the basic craftwork: they tell us (1) that the maid has a key and could enter the room at any time, and also (2) that the maid may act all serious and deferential when on duty, but she is an individual who in private is frivolous and playful like any young girl.
But that's not all. In the second scene, O’Brien goes further and plants the higher level of seed. As the maid is going past her out of the kitchen, Mrs Reinhardt points at a plate of fruit and says, “May I?” and the maid says, “Of course, madame; they’re all hanging out there in the garden to be picked.” So that introduces, very subtly and in retrospect, the notion that the maid might regard things that are lying around as there for the taking.

Now, having pointed out how the story mechanism works there, I'm going to add a caveat. Analysis is not the same as synthesis. All these patterns, where to put the plot points... well, knowing the paradigm of a Mozart concerto, say, wouldn't mean that you or I could write one. Storytelling has to get into the bones, to the point that you do this kind of thing without thinking. You only notice it after you've done it. When Garth Marenghi says, "I often re-read my own stories to learn from them" it's intended as a joke. But so you should. It's analysis of your own work, even more than that of the masters, that will guide you in planting the seeds to make your story grow.
Posted by Dave Morris on Sunday, June 26, 2011