How to put the reader on the edge of their seat 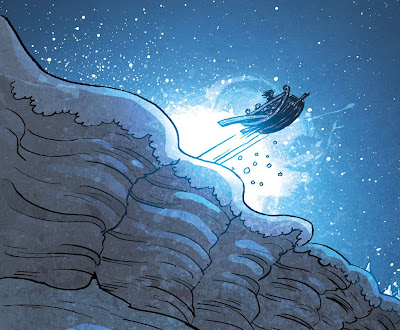 The story’s hotting up. Your characters are in trouble. You pile on more and more things to make their lives difficult. But gradually it starts to dawn on you that these extra dangers aren’t making the story any more gripping. The hero is in a canoe, he’s lost the paddle, he can’t swim, and now the rapids are coming up. That ought to be exciting, surely? Aren’t you doing everything you’re supposed to? So why is your reader stifling a yawn?

“Out of the frying pan into the fire.” Notice that we don’t say, “Keep it in the frying pan but turn the heat up.” You can’t ratchet the tension simply by shovelling more problems onto your characters’ heads. When you do that, the reader just sees a string of obstacles that have to be dealt with and they project forward: “Okay, so once the hero has done A, found B, discovered C, it’s all over.”

Knowing that, the reader will relax. So you need to throw in something completely from left field: a plot point that leaves the reader’s head spinning: “Whoa, I didn’t see that one coming!” Oh yeah, you can bet the character wishes he was back in that frying pan now.

Your story has a threat. An alien mothership over the capital, say. The hero has a plan to deal with the threat; he’s going to fire himself out of a circus cannon up into the ship’s waste disposal tube. But if you want to keep your reader’s interest, that plan cannot work perfectly. Right at the climax, we have to see the hero faced with an unexpected twist. Something that blows his plan to shreds. And the more unexpected that twist, the better.

There’s also a bait-and-switch variant. Have the hero’s plan work just fine to deal with the main threat, but then throw in a new danger just when we caught our breath and were starting to climb down. The new threat is a surprise we couldn’t possibly prepare ourselves for – it comes out of the blue just when you thought it was all over.

Here’s an example from the movie of My Favorite Martian. Tim has to prevent a video of Uncle Martin being broadcast on TV, which would expose him as an alien. Martin can’t help because he’s literally going to pieces. Meanwhile, Martin’s spaceship, which is set to explode, has been shrunk to toy-size with Tim’s girlfriend on board and left in the garage, where the neighbour picks it up for a jumble sale. With a bit of fast-paced rompy action, all these chaotic problems are resolved: they get the video, Martin is reassembled, and they catch up to the neighbour’s car and retrieve the miniaturized spaceship. So far we’ve had a bit of fun, but everything got tied up pretty much as we expected. But then, just at the moment of triumph, the government agents who were chasing Martin and Tim turn up and zap them with a tranquilliser gun. Unconscious, they’re hauled off by the men in black to a remote army research base. And now we have no idea what’s going to happen next.

That’s an example of how to keep the reader guessing on the overall narrative. But, as we always say here, stories are fractal. The same techniques for escalating tension work on the level of an individual scene. There’s a good example of that in Red Chamber, a yet-to-be-published thriller by James Wallis and his extreme writing team.

In this scene, the hero, Tom, is a newspaper reporter who is on the run from the police. He needs to get on board a Tube train at Sloane Square but there are coppers on the platform. His first plan is to climb over the wall from the street, the Tube line being open to the air at that station. Of course that isn’t nearly difficult enough to impress the reader. But Tom also needs to get across to the further platform, which requires him to walk along a narrow iron conduit that runs above the tracks. (The conduit really is there at Sloane Square; it carries a river from one side of the station to the other.) It’s snowing, so the ironwork is slippery, and as an added complication Tom has to be careful not to dislodge any snow that would alert the policemen below. Reaching the other platform just as a train pulls in, he lowers himself down onto the roof of a carriage, intending to swing down inside as the doors are closing.

All of that sounds like nail-biting stuff, sure, but even so it’s still what role-playing gamers would call a “skill roll”. The reader knows that the writer can just decide if Tom pulls all this off. To get our pulse racing, we need to see him face a problem that we didn’t foresee. All this business about clambering around on frozen pipes has merely been a precursor to that, establishing that Tom is doing some really difficult and dangerous things so that we are feeling the stress along with him.

That was the frying pan; here comes the fire. Tom looks down and sees a copper right there on the platform beside the doors. So he can’t swing down into the carriage after all. Okay, he thinks, I’ll ride on the roof until we get to the next station. So he, and we, start to relax - but too soon, because as the train moves off, Tom sees there is only about a foot’s clearance on the tunnel ahead. Scrabbling backwards, he falls between two carriages and hangs onto the bellows between the carriages with his shoes just inches from the live rail. Then at the next station he climbs onto the platform and makes his getaway. And boy, do we feel he’s earned it.
Posted by Dave Morris on Wednesday, July 13, 2011