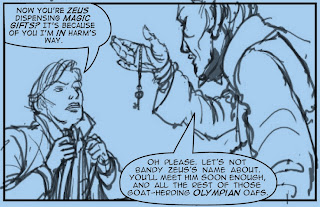 What I enjoy about writing comics is that it's like making a movie, only better. You get to work out some rough dialogue, then you position the characters in the scene, then you get to refine the dialogue. If it's not working you can move them around, try another angle, another turn of phrase. And they never wave a contract in your face and ask for overtime.

The only way that regular movie-making has the edge is in the editing. Since every scene change should ideally come at the end of a page, or anyway at the end of a tier of panels, it's the very devil if you suddenly decide you need to slot something else in.

By the time Leo gets to doing the pencil art, we’ve already worked out 99% of the direction of each scene. Occasionally we find that a particular shot or line of dialogue isn't working. At most this involves changing one or two panels at the pencils stage. (We work in "episodes" of 5-6 pages at a time. Considering there are typically 35 panels per episode, that's not a bad batting average.) And we've never yet had to completely change a panel after it went to inking - though Nikos does work the occasional miracle at the colouring stage when Leo and I overlooked something.

The process is versatile, but there are times when you have to kill a darling. This scene between Jack and the Kind Gentleman, for instance. I really liked the way Leo positioned the "camera" - it made for a great dramatic face-off. But we realized that the bestowing of the magic key wasn't getting enough prominence. That key is going to be important, not only in plot terms (it can open any lock, though it can't blow up a Cyberman) but because this is where the Kind Gentleman really starts to bind Jack to him, dispensing gifts for all the world like a traditional faerie king to his favoured mortal godson.

So Leo did a new version of the panel to put the emphasis on the key. The preceding panel is a wide establishing shot, so we didn’t actually need to show their relative position or setting again. But the earlier version did look nice. The beauty of a blog, of course, is that you don’t have to kill your darlings outright. You can lay them sleeping in their glass coffin, as here, and invite people in for a look.

This scene, incidentally, is from the start of Chapter Five, "The Darkest Hour", which is almost exactly halfway through season one: Winter. 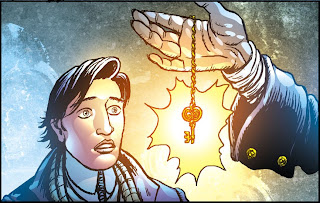