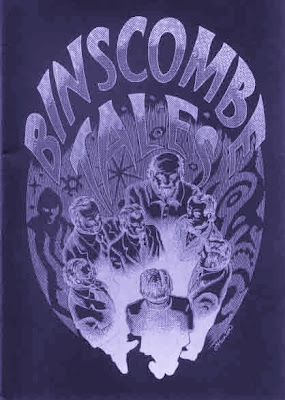 Leo and I do a whole bunch of work-for-hire jobs to finance the Mirabilis issues that are what we really care about. Because that's the life of a self-publishing comics team - not too dissimilar to bank robbers working in Starbucks to pay for the acetylene torches, I guess. But every so often we do at least get to work on something we're honestly passionate about. One such project is the Binscombe Tales series of weird tales that we're editing on behalf of Fabled Lands LLP.

My first encounter with the Binscombe Tales was in the late 1980s when John Whitbourn (a very old friend and fellow role-playing gamer) was one of several guests at a ghost story evening chez Morris. We had a nice dinner, a little fine wine, and settled down around the fire to entertain ourselves with some cosily spooky stories; an activity that mankind has only been doing for - what? - twenty thousand years and more.

Then John got up and produced the story he'd brought, the first (as it later turned out) of an ongoing series. As he read, a chill dark hand closed over the group. We were transported to a suburban street under dim street-lamps, hurrying past with just a nervous glance across the road at an ordinary but suddenly sinister bus shelter. With the final words, you could hear the sigh of long-held breath and we looked around at each other with that bright-eyed smile that says you know you've just had the bejasus scared out of you. Everyone that evening had come armed with a tale to tell, and there were talented, experienced writers there, to be sure, but there was no disputing who was the storytelling king of the fireside.

"Waiting for a Bus", the story that gave such a shudder to those dinner party guests who were privileged to hear it first, was picked as one of DAW's World's Best Fantasy Stories of the very next year. It has been widely anthologized since, as have other Binscombe Tales. Everyone who reads one of these stories will immediately recognize a fresh and authentic voice in English horror-SF-fantasy. And yet, until now, only a small cult readership has experienced the special delights, dreads and wonders of the Binscombe Tales series. Originally issued as limited-edition hardcovers thirteen years ago, the books are now out-of-print and fiercely sought by collectors.

These are stories in the tradition of Clarke's White Hart and Pratt & de Camp's Gavagan's Bar - themselves inspired, no doubt, by the tall tales of A J Alan and Dunsany's Jorkens yarns. John Whitbourn's stories are inventive, often whimsical, but unlike those earlier series there is a real bite to them. The Binscombe Tales will entertain you, but also they will unsettle you. Characters and relationships develop, usually not quite as you expect. The crackling fire and the convivial clink of glasses in the Duke of Argyll (the Binscombe local) often disguises a pitiless disregard of strangers' wellbeing. As a writer, John Whitbourn has bags of originality (check out his story "Hello Dolly", in the Fifth Book of After Midnight Stories, which happened to precede Amy Pond's domestic nightmares by well over a decade) and he is gifted with a compelling and engaging narrative voice; but it is that lacing of stark truth that, for me, elevates the Binscombe Tales out of genre into literature.

Well, connoisseurs of the uncanny, the outré, the darkly surreal and the just plain odd need look no further. In a few short months, Fabled Lands Publishing will issue the complete Binscombe Tales in a three-volume print edition and a set of Kindle chapbooks too. And in the process, Leo's and my comics "fighting fund" will be topped up with the wherewithal to see us safely through another three or four issues of Mirabilis. Doing well while doing good, I call that.
Posted by Dave Morris on Thursday, August 18, 2011