New version of the iPad app this week 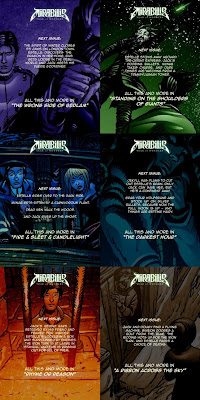 And now we wait. Not for long, though. Our resident iOS coding genius, Simon Cook, has just uploaded the new version of the Mirabilis iPad app, and the only delay is while Steve Jobs satisfies himself that all the cool extra features do full justice to both Apple and the Year of Wonders. Give him a couple of days and you should be seeing the fruit of Simon's labours up there in the App Store.
But what exactly are those extra features? Well, in addition to having much easier access to the in-app storefront and your collected issues, there's direct connection to Twitter, Facebook and email so you can tell your friends about the comics you're reading without even leaving the app. Also there are next issue screens and buttons, the menu bar now comes with auto-dismiss if you're not using it, and you can look at the Mirabilis Facebook group from inside the application too.
In the next update we should have a news feed straight on the storefront screen, maybe even with material from this blog, making the app even more of a complete comics-reading experience. But Simon deserves a rest, so we're going to hold on that until the next 6 issues (that's all of Mirabilis Spring part one) are ready to start sending your way in a couple of months. In the meantime, if you haven't caught up with the 8 issues of Mirabilis Winter yet, here's the full round-up:

#1: The World Turned Upside Down
Jack Ember joined the army to find adventure. But when a green comet heralds the dawn of a new century, Jack is destined to get more adventure than he bargained for – in the form of warmongering cabbages from Pluto, a witch who can command the weather, antique pistols that shoot hornets instead of bullets, and a two-headed coin whose toss could decide the fate of the world.

#2: The Wrong Side of Bedlam
Magic shows its dark side as Jack finds himself caught between two very untrustworthy mentors. Gus is a centuries-old wizard or an escaped madman – or possibly both – while the Kind Gentleman is the kind of faerie godfather who’ll grant three wishes you can’t refuse. To save his grandmother, Jack is forced to undertake a quest that will change his life forever.
#3: Standing on the Shoulders of Giants
Jack is on the outside looking in when Estelle stows away aboard the Orient Express and McNab comes spoiling for another duel. Steaming straight into a gruesome case involving severed heads and missing blood, Jack finds himself the prime murder suspect. And did we mention the four hundred foot baby?

#4: Fire and Sleet and Candlelight
Open graves, a brooding castle, and dead men walking in the woods… You know when you’ve broken down in Transylvania. McNab gets bitten by a carnivorous plant, Jack’s listening at keyholes, and Estelle gets her Goth on.

#5: The Darkest Hour
Jekyll plans to cut out Estelle's brain and use it to make her monsterpiece. Only Jack can save her, but he's a continent away – oh, and he’s dead. Grab your wolfsbane and stock up on silver bullets, because the full moon is up and things are looking hairy.

#6: Rhyme or Reason
Jack's behind bars, betrayed by his friend and framed for murder. Estelle's out at sea, locked in a box and surrounded by enemies. Meanwhile, the Auction of Marvels gets under way and the only hope of saving Gran is slipping away by the moment.

#7: A Ribbon Across the Sky
Time’s running out and Jack is forced to make some hard choices. With Simeon closing in, Jack and his foe have their final, fateful showdown beneath the sea.

#8: Saltwater and Ashes
Jack's in deep water. Mentallo's at the end of a rope. Dougy’s had enough of being one of the good guys. And Bodgkiss is back, and she’s bent on revenge. All this and airships too.

Two hundred pages of awesome fantasy action - can it really only be $12.93 for all that? Go on, treat yourself.
Posted by Dave Morris on Monday, August 01, 2011