Stepping into the story 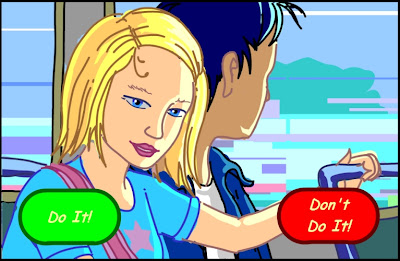 With my book app of Frankenstein out next week, I’ve had several reviewers asking about the first-person interactivity. Unlike a traditional choose-your-own gamebook, where “YOU are the hero”, in Frankenstein the main character narrates the story and turns to you for advice. You’re his Tyler Durden – or maybe I mean his “Jack”.

This form of interactivity is new to gamebooks, as far as I know, but certainly didn’t leap into being just for Frankenstein. It’s an idea prototyped in various interactive drama projects that I’ve developed over the last ten years. I’ll talk some more about some of those projects next time, but first, by way of introduction, here’s a piece I wrote in Game Architecture & Design (1999) that started me thinking along these lines:

Most of the time when you’re playing a game, what you’re doing is just that – play. You’re exploring, running, jumping, or thumb-twitching furiously to unleash a barrage of bullets. Which can be lots of fun, but a game that only had that going for it wouldn’t be fun for long. Gameplay enriches the experience. It’s the difference between idly kicking a football about in the back yard, or setting up a pitch with goals and having a match.

But gameplay is only one way of interacting. Consider a sandbox-style driving game like GTA or The Getaway. If it consisted of only city streets for you to drive around in, that kind of game would soon pall. The first thing you want to do is be able to interact with your environment. Bump another vehicle off the road, smash the doors off a police car, run somebody down. It’s violent fun – but it’s still fun. Kids play the same way, building bricks and knocking them down. So you need to have enough opportunities to interact that the setting becomes more than a backdrop; it becomes an environment.

A game like that will be better still if you can, for instance, knock over a fire hydrant and leave it spouting water. Then that pool of water makes the road slippery so that a passing car skids onto the sidewalk. A pedestrian has to dive out of the way. He hauls the driver out of the car and punches him. Now, what if the driver identifies you, the player, as the source of the trouble? He points, the pedestrian looks your way, and then both characters start yelling at you. That way, the interaction has created a story with tension, the promise of action, and emotions running high.

As an aside, this cascade-of-events kind of story emergence may seem an ambitious goal, but it was part of the Dreams game I worked on at Elixir Studios. More on that later.

When you are playing a game like Black & White or The Sims, most of what you are doing hardly involves gameplay, by which I mean strategic choices. You might just be routinely uprooting trees or steering characters out of the door in time to catch their bus. You don't mind (you probably don't even notice the lack of gameplay in those activities) because you are having fun. But if these products weren't interactive, you would certainly notice that. Then you might start wondering if your time wouldn't be better spent reading a book, watching TV, or throwing a frisbee around in the park.

Consider the ways that a player could potentially interact with a game:
How many of those kinds of interactivity do you commonly see implemented? The first, certainly, but only insofar as I can make the game easier or harder, or change the speed. Why shouldn't I also be able to say to a computer opponent, as I can to a human player, "Hey, let's build up a big army before we start fighting," or, "Don't attack me because I just want to have fun building a city"?

The second kind of interactivity in that list – direct control of the characters – accounts for pretty much everything else. But interactivity doesn't have to be about what happens. It is often more interesting to think about why something happens, or how it caused other things to happen.

"If you are a process-intensive designer [...] then the characters in your universe can have free will within the confines of your laws of physics. To accomplish this, however, you must abandon the self-indulgence of direct control and instead rely on indirect control. That is, instead of specifying the data of the plotline, you must specify the processes of the dramatic conflict. Instead of defining who does what to whom, you must define how people can do various things to each other."
Chris Crawford, writing in Interactive Entertainment Design, April 1995
Games guru Chris Crawford talks about process (the laws of the game world) as opposed to data (the details of what happens in the game world). To illustrate this, think back to some of the early discussions of interactivity using broadband TV. Systems were proposed in which the viewer could decide what the characters did. Essentially, they were talking about that unlamented genre the interactive movie.

Would that work? Imagine an interactive version of the television series ER. You get to choose. Does George Clooney obey the hospital rules, does he give the experimental drugs to the sick kid, or does he just go outside and play basketball? Is that a rewarding way to experience interactive drama?

No. It assumes that the point of all drama is simply to find out what happens next. If it's good drama there ought to be a whole lot more to it than that. In the hypothetical example, is the point of the player's choice to guess what George Clooney’s character would really do? Then the interactivity reduces merely to an empathy test. Is it to make him do things he wouldn't normally? Then the interactivity is just a nerdy way to test the storyline to destruction. In neither case is characterization explored in any detail, and the only theme we are apt to uncover in this story is that it's kind of weird when people behave inconsistently.

Now consider a different way we could have played our interactive ER. This time we don't get to choose what the characters do or say. Now all we can do is choose which character to follow around the hospital. Dr Carter quarrels with Dr Pratt over a diagnosis - both storm off. We follow Carter, who gives his version of events to a third character. Later we switch back to Pratt, who by now has spoken to various other characters and is pursuing another agenda. It is only later, if ever, that we may stumble upon the resolution or aftermath of the quarrel that we witnessed at the start.

This example in itself isn’t a sufficient condition for interesting interactive drama. But it illustrates an important point. All drama, whether interactive or not, derives momentum from the viewer’s relationship with the characters. A rule often quoted in writing classes is that a character has to change and develop – hence the ubiquity in screenwriting of the redemptive story arc. In fact, characters don’t necessarily have to change to be interesting, but our understanding of the character has to change. We need to see things that will build on our first impressions and, ideally, that will surprise us and force us to reassess those impressions. That’s because the viewer is part of the system – and if that’s true of non-interactive media, you can bet it’s even more so in the case of games.

The aim of all storytelling is to make the audience care. Interactivity is a new(ish) and powerful technique in the writer’s repertoire for achieving that goal. The ER example is only arms-length involvement, in that you are still interacting as an external observer. It’s better than pressing a button every time you see a white rabbit, or brushing virtual dust off text so you can read the story – but it’s only just better. However, it is also possible to offer interactivity that draws the reader or viewer into the story, by developing a direct relationship with the protagonist. That’s what I used in Frankenstein and, ten years earlier, in a teen drama for Flextech called Dilemmas, which I’ll talk about next time. 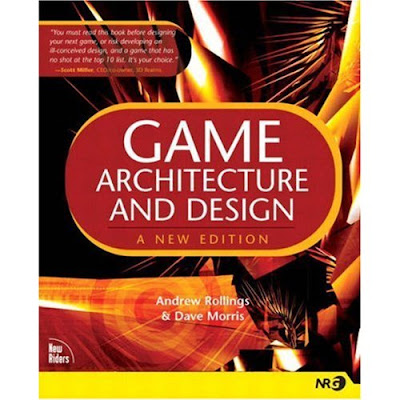