When a character asks you for advice 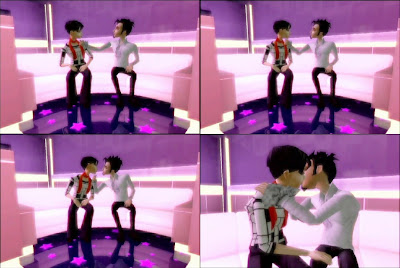 About ten years ago, Leo and I developed a show called Dilemmas for Flextech. It was an interactive cartoon for 9-12 year-olds featuring a teenager called Cathy who would often break the fourth wall by turning to ask the viewer for advice.

Dilemmas arose out of adventure games, but it always bothered me the way those games would focus on things like how to stack up the crates in the right order to reach the rope that you could tie to the hook... You know, puzzle stuff. It treats a story as a problem to be solved. The really interesting choices in a story are the personal ones: white lies, temptations, keeping your promises, letting down a friend, etc.

Not that Dilemmas was about picking the right moral path. That's just another kind of puzzle: "Well done, you score 20 Niceness Points". Instead, in Dilemmas, you had to build a relationship with Cathy. She would almost always take your advice (unless it was really dumb) but the outcome often depended on how well you knew her. Things could go badly wrong if you hadn't judged the course of action that suited her best. She was actually quite an effective liar, for example - so suggesting the fast-talk option often worked. But she didn't always feel good about lying, and that would have an effect too.

Some of the outcomes might appear better or worse, but the important thing was that whatever you suggested for Cathy to do, you'd get a story. There was no fail-and-start-again stuff like in a game. And she remembered the advice you gave her, and whether it got her into trouble, so there was that sense of advising a friend rather than steering a puppet-like character through the hoops of a plot. Over time, you could earn Cathy's trust and then she'd open up to you more.

As I said, Dilemmas was targeted at 9-12 year old girls - not, in 2001, considered a very big potential games market. And it suited a style of play where a bunch of viewers would sit watching on the sofa, calling out suggestions or letting Cathy get increasingly impatient till she did something off her own bat. Back then, not a chance. Flextech asked us to work on a steampunk thing called Dr Mysterio instead. But I always liked the idea of interacting as confidant to the lead character, and in the end I got to use it in a very different kind of story: Frankenstein.
The images above are not from Dilemmas, however, but from the game I designed at Elixir Studios, Dreams. That too was about making relationships with the characters. Our design motto was: "This is my town. These are my friends. Here are our stories." And the scene here (a snippet from a longer story arc involving a love triangle that you could nudge, chivvy along and generally meddle in) is not a faked-up sequence; it was a genuine, working part of the game. More about Dreams next time.
Posted by Dave Morris on Friday, April 20, 2012