Walpurgis Nacht in Germany and Eastern Europe is the time for witches and spectres to roam abroad. Halloween might seem a better time for that than the spring, but the principle is the same. As seasons change, there’s the chance for unnatural things to slip between the cracks.

In the deleted opening chapter from Dracula, Harker has already sent his coachman away with the rash assertion that, “Walpurgis Nacht has nothing to do with Englishmen” when he finds himself outside a tomb in the woods near Munich:

"Walpurgis Night was when, according to the belief of millions of people, the devil was abroad - when the graves were opened and the dead came forth and walked. When all evil things of earth and air and water held revel. This very place the driver had specially shunned. This was the depopulated village of centuries ago. This was where the suicide lay; and this was the place where I was alone - unmanned, shivering with cold in a shroud of snow with a wild storm gathering again upon me!"

Chin up, Jonny boy. At least you’re not in Transylvania. Yet.

The images here come from Mirabilis episode sixteen (“The Dark Side”) back from the days when we were running in The DFC in 5-page episodes rather than the 25-page issues we have now. It was timed to appear in print in the week of Walpurgis Night (although in story chronology the action there is still only mid-January) but, of course, The DFC was already buried in unconsecrated ground by May 2009. Never mind - we kept right on going with all the crazed energy of one of Dracula's Szgany servitors and are now working on what would be episode forty-nine in DFC reckoning.

Turning to a whole other continent of vampiric lore, here’s a little bit of bitey action with an Indian flavour that I wrote years ago for the bright young film-making team of Dermot Bolton (producer) and Dan Turner (director). Turn down the lights, draw your chair closer to the screen, and shiver at the story of A Dying Trade part 1 and part 2.

Where’s Mr Pointy when you need him? 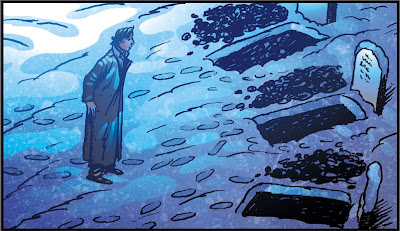