Pick a side. The future or the past? 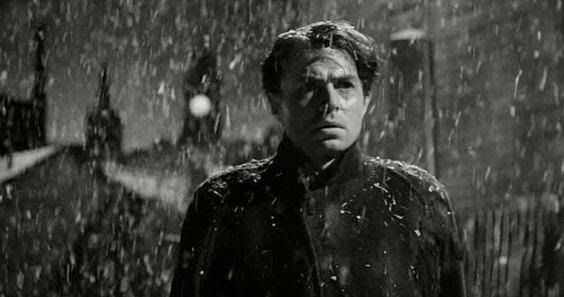 Funny how things get dredged up. I recently got to thinking about a very old idea of mine. I’ll tell you a bit later what jogged my memory. A long while ago – must’ve been four decades at least – I was watching an old Carol Reed movie called Odd Man Out, about an IRA man on the run in 1940s London. Thinking of spies having to lie low – soldiers, that is, but out of uniform – I got to imagining a society that waged war against its own future.

What kind of a war would that be? Well, one way to do it would be old Nazis plotting revenge against a modern, distinctly anti-fascist Germany, but that felt a bit tired. It hardly counts as a war when a bunch of OAPs set fire to a bus stop or daub a swastika on a wall.

I was striving for something more jolting to the audience’s expectations, which probably meant more science fictional. A war against the future suggested society having reached an impasse that only time could break. So should it be sleeper agents in a literal sense, floating underground in suspended animation tanks until the moment came to rekindle the conflict?

Trouble with that, it’s a little like the core premise of Pyramids of Mars, only with a very different skin (or at any rate bitumen-soaked bandages) over the top. Nobody would notice, but I still felt that treating it that way would be wasting the idea. Obviously the best approach would be to have outright time travel, so that armies could pour out of the past to mow down their own descendents. Firing back could be a knotty problem. But done that way it’s not special. You wouldn’t notice that the interesting thing was a society at war with what it had become. The time travel business would overshadow all that.

Sometimes you just can’t see the way to make an idea work. Hitchcock wanted Cary Grant pursued by a tornado across Indiana. “But how can the heavies manufacture a tornado?” asked Ernest Lehman, who actually had to write the damned thing. Hitch settled for a crop-duster, but he wasn’t happy about it. I know how he feels. The war against the future got slung onto that subconscious junk heap of unworkable gems – or unpolishable you-know-whats. And then I came across a couple of brilliant tweets by Paul Cornell that bought it all back.


I lived through Thatcher, and I have to say, this coming General Election is the one, the future or the past.
— Paul_Cornell (@Paul_Cornell) May 27, 2014

So there you are. No need for a Tardis or a cryonic pod. No need even for superannuated reactionaries blowing up their hippy grandchildren to teach them a lesson. The war against the future is interesting when it happens (as it always does) between neighbours, within families, both sides lining up to decide whether civilization should point forwards or backwards. And I knew that. I’ve read about enough revolutions, hot and cold, throughout history. That’s how to write my story. The answer was staring me in the face all along. Maybe it was just too close for comfort.
Posted by Dave Morris on Saturday, June 25, 2022