Hanging by a thread 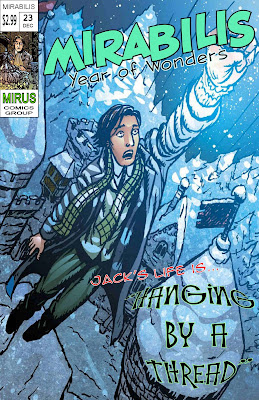 The Bookseller last month published a special issue reporting on comics and graphic novels in the UK. Available here it makes for interesting, if at times uncomfortable, reading.

Take Philip Stone’s analysis of GN sales figures. Mr Stone notes that sales this year are up “a mouth-watering 14.5%” and that the UK graphic novel market is worth some £11m. But the actual numbers on the opposite page paint a slightly less rosy picture. Leaving aside Watchmen, graphic novels in the UK are typically selling around 6000 copies a year – and that’s based on just the Top 20 adult titles. Sales figures in the children’s market aren’t even half that, with the Coraline graphic novel (a movie tie-in, after all) shifting about 2500 copies in the year.

Another telling statistic was that seven times as many people bought Watchmen in paperback as in hardback. And that despite there being not a huge difference in RRP: £17.99 and £24.99 respectively. So there seems to be no real premium market here.

The main lesson is one we all knew already. To work as a business, graphic novels need to be aimed at an international market. For whatever reason (and Paul Gravett discusses this in another of the articles) the British are not much interested in the medium of comics. In France, the graphic novel market is massively bigger, with the top adult titles shifting more than fifty times as many copies as UK sales of Persepolis, Killing Joke or Death Note. Stateside, the average graphic novel sells 15,000 copies annually – and that’s across five hundred titles, not just twenty, so figure on the top-sellers doing more than ten times that.

Another thing about the top-sellers – in most cases they didn’t start out as graphic novels, they built up a following in regular monthly comic books first. Not many people want to take a leap in the dark and shell out $17.99 (around $30) on a story they haven’t had a chance to sample first. Now, I grew up reading comic books and I’d love for Mirabilis to come out every month, but – like it or not – those days of the regular printed comic may be behind us.

Suppose you start up your own comic imprint next year. If you’re aiming to get to a wide readership you need to get into newsagents and comic stores, and by the time you’re breaking even you’ll be spending as much on printing and distribution as you are on actual content. You won’t get any advertising revenue because your imprint is tiny and unknown. And you won’t build much of a wide readership anyway because you won’t sell many copies in newsagents, and only the hardcore fans go into comic stores these days. Frankly, you’ve got a better chance of beating the laws of thermodynamics.

All of which leads us inevitably, inexorably, back to electronic publishing. And bear in mind I’m talking about e-comics as a stepping stone now. A way of ensuring that there can be a commercially viable version of the story in print form.

First, you need to reach an international market. App Store and the PlayStation Network will get your work out in front of potential customers in 70+ countries. (On DriveThruComics you’ve got the whole world, though personally I’m less keen on reading a PDF on my PC screen.) As Sandy Spangler pointed out here recently, being in App Store doesn’t mean you’re going to get noticed. But that’s even more true of bookstores, where failure to get a window or table display at the front means that your expensively-printed graphic novel about zombie tech support guys (“I.T.’s Alive” – ho ho) will lie scrunched up and unnoticed next to a Bash Street Kids annual.

One advantage of putting out the episodic version on phones and handhelds is that you can structure the payments much more flexibly than you can with a printed comic book. I’d give the first two or three issues – or “chapters”, if you prefer – of Mirabilis away free. Then maybe $1.50 for the other six, so you can get the whole of book one on iPhone for $9 – and, crucially, you only need to pay once you’ve decided you like it.

So here’s some pure guesswork. Don’t use these figures in actual recipes or your cake may not rise:

Option 1 is to publish your comic in monthly installments. So you get 10,000 readers who each pay $24 for all eight issues. And because you went through retailers, after paying printing and distribution costs you’re lucky if your revenue from all those sales is $40,000 - at least half of which will go on the advertising necessary to get 10,000 paying customers. So that leaves you with a page rate of $100. Hence the expression: don’t quit your day job.

Option 2 is to put it out electronically. This is all guesswork, remember, but say you still spend $20,000 on marketing and you get 150,000 people worldwide looking at the free episodes. Of those, maybe 15,000 are hooked by the story and buy it at $9. App Stores take 30%, some others take less, but call it $6.50 as your share per customer. That’s now a page rate of $400 after deducting the advertising. This could be your day job.

Remember that we’re talking here about starting an imprint with a view to generating a wide readership via retailers and selling real, physical, printed books in bookstores at the end of it all. I need to emphasize that because option 1 can work fine if you’re just looking for direct sales. You can print up at 50 cents, sell at $3, and in that case One Thousand True Fans will give you a (just about) sustainable business. But that’s a whole other discussion.

To make a “mass market” business out of this, you’d need a start-up fund of about $500,000 (£300,000) to pay for eight to ten titles averaging 150 pages - or a quarter of that to pay for advertising, plus ten creative teams willing to work entirely on the back end. Well, I’ve got a company with 175k to invest if anybody else is interested.
Posted by Dave Morris on Sunday, December 20, 2009