Fantasy isn't meant to be cosy 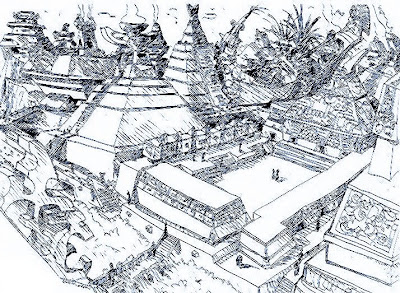 Mirabilis never had any of that sword-n-sorcery stuff. It was our deliberate policy. Mirabilis was about what happened if the imagination spilled over into everyday reality, indeed into the stuffy keep-the-lid-on reality of Victorian/Edwardian life. (Which is the same theme as Mary Poppins, now I come to think about it, although perhaps our take on it was a little different.)

Swords and sorcery fiction, pulpy fun though it may be, is not generally about letting the imagination off the leash. More usually, in fact, it turns out to be the most conservative of all genres, a concrete branch of fiction with carefully defined rules, more about cosiness and reassuring formalism than the often disturbing and elusive nature of true fantasy.

The only reason I feel justified in plugging the world of Abraxas on this blog is that it belongs to a branch of swords-&-sorcery that has so long fallen into disuse that it has all but regenerated itself. I refer to science fantasy, the ancient-world-flavored genre of swordplay, magic and vril-powered technology once popularized by the likes of Clark Ashton Smith, Leigh Brackett, Robert E Howard, L Sprague de Camp, Fritz Leiber Jr and Edmond Hamiliton. Devised by me and Jamie Thomson, Abraxas is the kind of swashbuckling fantasy world that kicks elves off the side of air cars and would shoot hobbits in the face with an ionic blaster (3 charges remaining).

No, it's not Tolkien nor urban/dark fantasy and it's not steampunk neither. Oh, I can't tell you how bored I am by elves and hobbits and their ilk, whether cybernetically enhanced and palely nightclubbing or prancing around dank dungeons looking for orcs to twang arrows at. Unplug the jukebox, try another flavor. In the Burgess Shale of pulp literary history, there were a few more fantasy genres than that and the blood stirred fast and hot in their veins. If you're interested to find out more, pop over to the Fabled Lands blog. 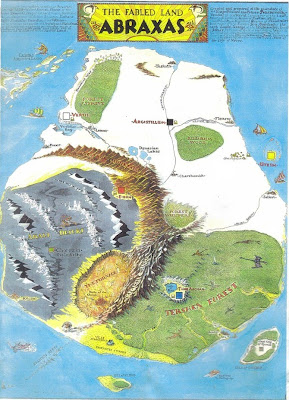