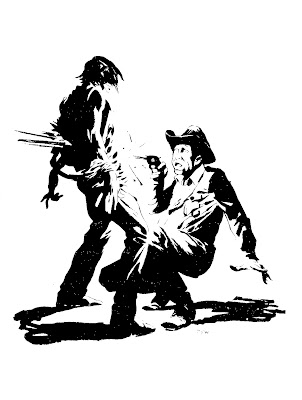 Attentive readers, or those with nothing else to occupy their time, may recall that I’ve posted before about Coven 13, the New Yorker of horror, a uniquely flavored digest-sized magazine that flared and faded in the space of only a few months at the end of the ‘60s. I remember well my youthful disappointment when I arrived at Dark They Were & Golden-Eyed to ask after issue 5, exactly as editor Arthur H Landis had told us faithful readers to do as he signed off in issue 4, only to be told by proprietor Derek Stokes that it had folded.

Except: “that is not dead…” and after strange eons, or indeed just a year or two, Coven 13 returned like the departed loved one in a Poe story, or indeed a Kate Bush song, smiling with cold white lips and telling me that I had only to unlatch that bedroom window, or indeed send off a US postal order, and the days of delicious fear would return on swift wings.

Yet its time in the grave had brought about a change. What returned was not Coven 13 and soon discarded even the name, calling itself instead Witchcraft & Sorcery. Gone was Landis’s debonair brand of dry, whimsical and very sophisticated horror. In its place now, the more traditional brand of fantasy-horror populated by demons and werewolves. There was more blood, more action. Where Coven 13 had uncurled itself across the chaise longue of pulp literature with the sensuality of a Chandler femme fatale, Witchcraft & Sorcery offered a more immediate and red-blooded sort of gratification. Women took their tops off, guys got horny, there was screaming and there were tentacles… But it wasn’t at all the same delicate lacing of erotically charged horror you got in the Coven cocktail.

I didn’t complain at the time. I never knew the awful irony of the Monkey’s Paw. “Bring it back,” I was demanding of all the fates and gods. “I don’t care what shape it’s in, I don’t care how death has altered it. I just want it back NOW!” And so it returned, brought as it seemed by the mere and irresistible strength of adolescent will.

Its second incarnation had a new large-sized format that I wasn’t too sure about at first, but soon convinced myself that it gave a feel closer to the great days of Weird Tales. And so it did. Witchcraft & Sorcery was much more a close cousin to the honest, down-n-dirty pulps than Coven 13 had ever been. I ripped open the envelope and I breathed it in, that heady perfume of cheap print that Cloud 109 creator Peter Richardson has pointed out has no equal. And I read it cover to cover. And again. I could recite the stories. I copied the pictures. I knew the names of the current authors and the demigods of the ‘30s whom E Hoffman Price wrote about in his regular column. I may have even looked at the poems (they were by Robert E Howard, after all).

Oh, I knew now it wasn’t Coven 13. It was something new. A cheap showgirl who’d make do with candy rather than the champagne Coven would have insisted on. I still loved it.

After two issues Sorcery was already in financial trouble. The third issue (labeled #7, as they’d kept the Coven 13 numbering) was slimmer with a monochrome cover. The stiff white paper made it look more like a fanzine. But it was clearly a labor of love for the new editor, Gerald W Page, and that was enough for me. Then, as now, creative integrity earns my undying loyalty. Mr Page, I have to say, paid dearly for that loyalty because I bombarded him with letters. Whether there was an issue each month or not (usually there was not) he would get pages of correspondence from me, and stories too, battered out on my nigh-on indestructible typewriter. And he, sweet and patient man, would sometimes send me long replies, always kindly deflecting my submissions without ever straying over into anything so brutal as rejection. He gave me great advice on how to make my stories better. His letters were as precious to me as the magazine itself. I have them still, almost forty years later.

He published some fabulous stories, too. It wasn’t Coven 13, but it was something just as good. It was my Weird Tales, the next best thing to being transported back through time to 1930. (Actually, on reflection, very probably a lot better than going back to 1930, given the Great Depression and the lack of antibiotics and all.)

Mr Page’s own story, "Thirst", appeared in the seventh (that is, third) issue – took up most of it, in fact. I’d never read a vampire story like it. It was hard-boiled and grubby, the lead character just an ordinary working joe on his way home from a bar when he got bitten. He spends the story bewildered, frightened, obviously doomed. If it appeared today you’d call it modern; in 1972 it was as if that pale lamia tap-tap-tapping had lobbed a freakin' grenade into my bedroom. And the story was illustrated by Jeff Jones and Bernie (then plain Berni, he was still saving up for the e) Wrightson. That was it: my moment of heaven. And, so that you can share it, here are a couple of those pictures that, although I had not seen them for decades before I searched them out to scan just now, seemed like seeing my own face in a familiar photo, indelible as they are upon the surface of my mind. Enjoy! 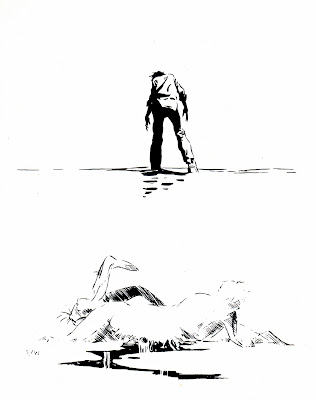