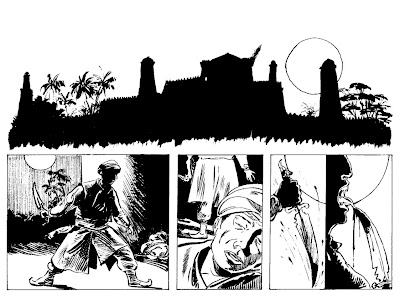 The king wanted a game of chess, but feared that his courtiers were letting him win. So he offered a boon to any man who could beat him. A man requested that if he won the king should reward him with one grain of wheat on the first square of the chessboard, two on the next, four on the next, and so on. It seemed a modest proposal. The king didn't discover until he lost that he could never hope to grant the boon, even by emptying every granary in the land.

Some authorities have extended the same principle to the spread of vampirism. If each vampire were to take just one victim a week, they argue, the number of vampires in the world should double and redouble until quite soon all of humanity would have joined the ranks of the undead. In less than the time from conception to birth, in fact.

Since this has obviously not happened, it follows that the condition of vampirism is not passed on quite so easily or so quickly as people imagine. Actually it is misleading to think of vampirism as though it were some kind of virus at all, and most of the misconceptions about it can be blamed on popular novels like Dracula.

Let us be clear about one thing: there are many kinds of vampire, and few of the vampires of history have had the stature of Count Dracula. Dracula became one of the undead, not by contracting an illness or being bitten by a bat, but by the sheer implacable force of his will. He was a man who simply would not submit to death. With energy born of relentless evil, he set about the task of building an empire of bloodthirsty dead in a manner that most vampires would never conceive of.

A megalomaniac, Dracula desired subjects to serve and worship him. But most vampires yearn for a solitary existence, and would prefer there to be no others of their kind in the world. This is the one and only reason that we are not overrun by the legions of undeath even now.

"O pity the dead that are dead, but cannot make the journey. Still they moan and beat against the silvery adamant walls of life's exclusive city."

What do all vampires have in common? It is much easier to list their differences: some drain life in the form of blood, some by stealing the breath or dreams of their sleeping prey, some (called succubi and incubi) by the enervating snare of their sexuality. Some are animated corpses, while others have no true material form but manifest themselves as extremely vivid and substantial ectoplasmic emanations. Some can pass for human, and may haunt the backstreets of our cities by night. Others, lacking the intelligence and charismatic force of their cousins, are barely more than monsters. The Feng P'o, or Northern Chinese Vampire, for example, has a manlike head but a giant apelike body covered in gore-soaked fur.

Some vampires, such as the Murony of Eastern Europe, can appear in the form of a black dog, cat or crow. Others are bound to a single hideous form - such as the Tzitzi Mimeh, or "Devil Women" of Ancient Mexico. They were the revenants of women who died in childbirth, and on nights of the new moon they would claw up out of their graves and hover around houses where there was a baby or a young child. If you caught a glimpse of their grinning, fleshless faces at the window it was a sure sign that plague would soon strike your household.

Like dragons, vampires have been known to all cultures of the world in one form or another. The Japanese are familiar with vampiric Gaki - souls whose karmic burden is so terrible that they are reborn as malevolent spirits with an unquenchable hunger. The Ketsu-Gaki is the residue of someone who was excessively cruel or violent when alive; it flits about the night like a giant macabre insect, seeking victims whose lifeblood can sustain it. The Yokushiki-Gaki is more like the vampires we are used to in the West. It can appear as an attractive man or woman, cultured and charming, and when it seduces its victims it drains them like a leech.

In Malaysia there are vampires known as Penangga Lan that appear as disembodied heads trailing a mass of bloody entrails as they float through the air. The Langsuir of the Phillipines is a female vampire that punctures a hole in the back of its prey's neck in order to drink the blood; it can hunt in the form of a glittering white owl or use its beauty to ensnare a victim. From Greece and Turkey come reports of invisible vampires called Opir, who interbreed with mortals and who can only be seen and slain by their own deformed offspring. The aborigines of Australia not so long ago lived in terror of a batlike demon called the Garakan, while 19th Century Cairo was haunted by a vampire that tore out its lovers' tongues with a deadly kiss and then drank the spurting blood that pumped from the wound.

"Leave the flesh to the fate it was fit for."

In the midst of all these tales of horror there are a few crumbs of hope. Accounts of vampires are almost unanimous in affirming that a vampire cannot enter a household unless invited to do so by someone who lives there. (This perhaps explains why vampires have developed abilities of charm, command and persuasion.) Most vampires, in Europe at least, are driven back by garlic. This must be wild garlic - "sorcerer's garlic" - and it is the small white flowers that the vampire abhors. Garlic cloves give no protection, and regular consumption of garlic is more likely to drive off vampire hunters than the demons themselves.

Mirrors can give some warning when a vampire is present, as it is said that vampires do not cast a reflection. Beware, though: only a mirror of polished silver has this effect, and it only works against Undead of the ethereal variety. A vampire with a true physical existence (a walking cadaver, that is) will still cast a reflection. A vampire of this type may also be immune to that other traditional defense, sunlight. Even Dracula, who was more probably a vampire of the ghostly sort with the ability to manifest in a variety of forms, was able to go about in broad daylight - though it was only at night that he was able to utilize all of his uncanny supernatural powers. Some sources claim that a vampire cannot cross running water, but it is inadvisable to rely on this. It derives from an old folk-belief that running water, particularly southwards running water, is holy and thus impervious to evil spirits. Possibly only a rural vampire who shares this belief will be affected by it.

Faith is the principal line of defense against the Undead. The crucifix, being the most potent symbol of Christ as well as an ancient talisman of the division between life and death, is anathema to any vampire. The vampire's personal religious conviction is immaterial: as a soulless monster, it abhors the sight of the cross and must retreat from it. In the hands of a sufficiently pure and pious individual, the cross can cause a lesser vampire to dissipate altogether. A more powerful vampire is simply "turned" - forced to depart.

Other religions also have some power over vampires. The Gaki of Japan are the result of a glitch during the proper course of reincarnation, the cycle of death and rebirth which Buddhists believe all things are subject to. They can usually be laid to rest by applying the Buddhist segaki rite for the dead, although first the Gaki's grave must be found. Islamic vampires tremble at the name of Allah and can sometimes be led to renounce their evil ways by reference to the Quran. Jewish vampires are motivated by demonic spirits. They are the forerunners of the traditional European vampire and are more powerful and purposefully malign than the vampires of the Slavic countries. Fortunately the elders of the Jewish church have access to magic via the cabbala, and are better equipped to deal with demons than Christian priests are. In former times Chinese vampires were generally courteous and quite conscious of their wickedness, needing only an appeal to Confucian ethics to point out the weakness in their character and impel them to self-destruction. This tendency has declined since the Cultural Revolution, however, and Chinese vampires are now among the most intractable and deadly in the world.

"What disturbs our blood is but its longing for the tomb."

Once a vampire has been rendered helpless by whatever means, it must be destroyed immediately and without pity. The creature will use all its wiles to escape this fate: threatening, conjuring images, pretending remorse, trying to hypnotize its captors, and so forth. Ignore any such ruse - even a show of hesitation is sometimes enough to dispel whatever advantage you have achieved.

First a sharp implement should be driven through the creature's heart. Some authorities insist on a stake of hawthorn wood (because of the hawthorn tree that Joseph of Arimathea caused to sprout at Glastonbury), but it seems that Harker and Morris were able to dispatch Count Dracula with a kukri and a bowie-knife. If the vampire is of the walking corpse variety, the demonic spirit possessing it will instantly be driven out and the body will attain its proper age and state of decomposition. If it is a vampiric ghost, its visible form will disband and you must then seek out its grave and repeat the procedure on its disinterred remains.

Once the corpse is impaled, any appropriate rites for the dead should be given while at the same time cutting off the head and - as an added precaution - the hands and feet. Various other measures can be taken at this point such as sprinkling holy water or wafer over the body. Lastly the remains should be burnt to ashes and those ashes either scattered over water or hallowed ground or else buried at a crossroads. If there is no crossroads nearby, a T-junction will do.

Van Helsing considers that no technique for dealing with and destroying vampires can be considered one hundred percent effective. These creatures assuredly are the most devious and mighty of all Earthbound unholy things, and the fate they threaten their victims with is nothing less than the damnation of the immortal soul. The best advice is not "Approach with caution", it is "Do not approach at all."

Hope you enjoyed our special Halloween feature. The story of how it came to be written is over on the Fabled Lands blog, along with the short story that eventually became the basis for A Dying Trade. The illustration is by Russ Nicholson - go and check out his blog too because I'll bet he has something really tasty for tonight's festivities.
Posted by Dave Morris on Sunday, October 31, 2010