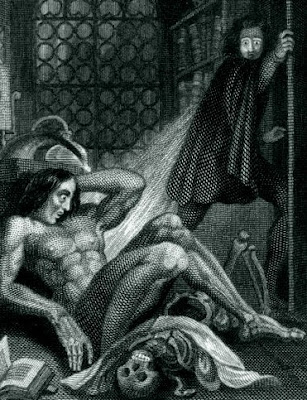 Having written a couple of dozen choose-your-own type books in my career, but only one of those in the last year (and that one, Frankenstein, very different from all the ones that came before) I’ve been musing on the dos and don’ts of interactive storytelling. My tolerance for rules, theories, and patterns doesn’t go very far – not when it comes to creativity, anyway; science is another matter. But here are three rules that are kind of pinned up above my computer screen, metaphorically speaking:

It’s easy to make people interact. You could lock each chapter so that the reader has to solve a sudoku before they can read on. But you haven’t made them want to interact, and they’re not interacting with the story, just with the medium that allows them to read it.

Consider what fiction is trying to achieve: to tempt us into clothing ourselves in another life, a different reality. That’s if it works. If you want to make your story interactive, your first hurdle is not to break that.

2. Just because you can do it doesn’t mean you should.
Even if an option to interact doesn’t harm the work, if it isn’t going to enhance what you’re doing, why put it in? Decide who this is for. Have a clear vision of what the work is. That way you’ll roll out a clean design, uncluttered by bells and whistles that add nothing to the experience.

3. Think about who the reader is in all this.
All right, so you can interact with this story – but as whom? This is the big interactivity question. (Well, one of them.) I don’t mean that you have to make the reader one of the principal characters. You certainly can do it that way, but it’s just one solution that suits one type of story. More generally, consider the role that you are giving the reader, whether overtly or tacitly, because that role will inform all their interaction.

One kind of interactivity we’ve been seeing in (digital) books is the playroom model. Your sweep your hand to blow characters’ hats off. You shake the iPad to get the characters to open up about themselves, or just to fall about. The reader’s role here is god – or author – and it works okay for kids, who are perfectly able to look down on and toy with characters in a story at the same time as putting themselves in their shoes. Adults don’t have the same mental flexibility, so for them this kind of interactivity is likely to have a distancing effect. It’s hard to empathize with characters when I’m treating them like bugs in a jar.

More alienating still are those book apps where you click on text to rearrange words. You might represent a character’s amnesia by having letters drop virus-like off the screen, or unconsciousness by having a rising black blot that obscures the text. Now it’s just a puzzle, a trick, an executive toy. The reader’s role is reduced to that of a person looking at words arranged on a page. And if you think that’s what a novel is, you’re in the wrong class.

Forget those tricks. Remember rule #1: a good story already goes way beyond that kind of hotch-potch interactivity. If you want to create interesting ways to interact, look at how a regular, non-interactive story engages the reader and play to that.

If I were writing an interactive spy thriller, I could give you the role of the hero’s controller. You’re advising him on his mission. Maybe he’s reluctant, so you have to coax him. And now, see, there’s conflict – which is good, because if you’re in conflict with the hero then you’re definitely engaged.

I could develop that in another way in an Arabian Nights fantasy, where your role is as the genie that the hero calls upon to get him out of scrapes. His wish is your command – but there’s obeying and then there’s service, two different things. So you’ll develop a relationship, either Chewie and Han or Captain Jack and Will Turner, up to you.

Those examples are quite overt and gamey, placing the reader distinctly in the story, even though in a supporting role. In Frankenstein, the reader’s role is only implied. You’re Victor’s confidant, the alter ego from whom he has only those secrets he also keeps from himself. That allows you to step back into the shadows, which is where the reader of a novel normally watches from. But it’s never that simple, is it? Am I only observing Bond when I read Casino Royale, say? Not at all. Another part of me is Bond, raking in the chips, sipping the martini, chatting up the girl.

That’s books, but the same applies to videogames. You have a role (in fact more than one) implied in the way you interact with a game character like Lara Croft or Max Payne. That sets up expectations – a contract between creator and reader/viewer/player. Break that contract, violate the rules of the role(s) you’ve put the user in, and you’ve got the fatal flaw of something like Heavy Rain, a flaw explained very insightfully here by Emily Short.

Rules are only useful as reminders of what you know already. To create good interactive entertainment, first understand non-interactive entertainment. You want to write an interactive novel? Look at literature, see what it is that makes that so powerful. Want to make a kids’ book app? Study the best picture- and popup-books. A narrative game? Soak up what’s effective in cinematic storytelling. That way, when you add interactivity, you won’t be fixing what ain’t broke.
Posted by Dave Morris on Monday, March 19, 2012