Original Hartas artwork to own! 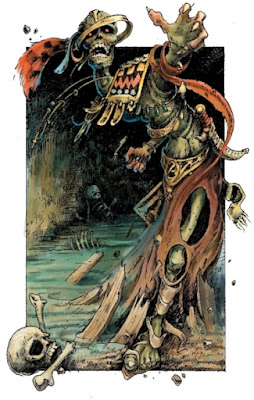 Recognize this? Maybe you don't know the wight in question personally, but the artist will be familiar if you've read Mirabilis. It's actually one of the very first illustrations that Leo drew for a gamebook called The Crypt of the Vampire, which was the first book that either of us worked on. It was a long time ago and the clocks were striking thirteen, and that's all I'm going to say, but here's the full story if you're interested..

Now Megara Entertainment are running a Kickstarter campaign to finance a hardcover edition of Le Tombeau du Vampire, which is a new French translation of Crypt of the Vampire, and the campaign also gives you the opportunity to buy Leo Hartas's original artwork for the book.

The Kickstarter page is in French, but there's an English translation in the sidebar for UK or US gamebook collectors and art fans who might want to own one of these unique drawings. Not prints, you note. Not copies. The actual honest-to-goodness pen-and-ink drawings that Leo did all those years ago for the Golden Dragon Gamebooks series.

How it works: pledge €600 and for that you get any one original drawing from Crypt of the Vampire. (You choose which one, it says, but presumably it'll be on a first-come-first-served basis.) You also get any one English hardback collector's gamebook from Megara Entertainment's webstore. Shipping to anywhere in the world is included in the price, with tracking. The drawings are 90mm x 145mm on 160mm x 225mm card. (Oddly, it looks as if this reward doesn't include the hardback of Le Tombeau du Vampire, but I guess they assume that if you're picking the English language option then you won't want the French edition.)

So, if you were one of the female students at Brighton University faculty of arts in those far-off days, and you turned down a late-night offer from Leo to show you his etchings, here's the chance to finally buy one! But the campaign has just three weeks left to run, so don't delay. Check it out here.

STOP PRESS: Alternatively, for €29 you can get a full-colour hardcover edition of the book in either English or French (your choice). Leo is colourizing his original pictures for this (and see above how awesome they look, too) and he's also going to be painting an all-new cover.

STOP STOP PRESS: ...Or maybe not. It now seems to be up in the air as to whether the cover of the English edition will be a new Leo painting, one of the colourized interior pictures, or just blank. The moral of the story is: don't launch into a Kickstater campaign without any planning and then change the goalposts every few days. Sigh. But you definitely can buy Leo's original art, and the English edition ought to have colour versions of his original drawings inside. For anything else, I can only advise that you check the fine print on the Kickstarter page on a twice-daily basis.

STOP STOP STOP. JUST STOP: Okay, so Megara Entertainment have now (June 2) announced they are cancelling the Kickstarter campaign for Crypt of the Vampire. Don't let it put you off crowdfunding new gamebooks, though, because the campaign for my story The Frankenstein Wars has just started. It's a Kickstarter Staff Pick and it's going great guns: in the space of half a day it's already 12.5% funded. And I can guarantee that Cubus Games, who are running it, will not cancel this campaign. More details of The Frankenstein Wars in the post above this one. In the meantime, if you want to buy Leo's original artwork, there's an easier solution than doing it by means of a Kickstarter - why not just contact him directly?
Posted by Dave Morris on Monday, June 01, 2015